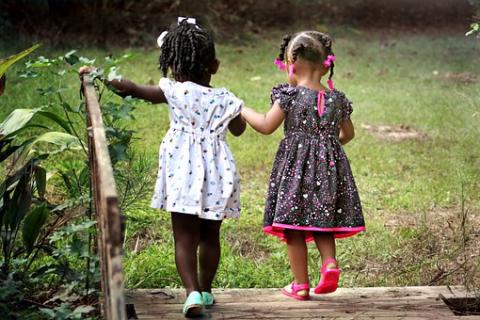 Two four year old girls in my nursery school class were the best of friends. When one entered the room, the other would run to give her a big, welcoming hug. They managed to sit side-by-side throughout all activities and held hands when they walked around the room.

These girls were bright, creative and mature beyond their years. Every so often, something of interest would happen at home and they would turn this idea into a little two girl play.

These plays delighted me so much I’d stop what I was supposed to be doing and watch (from afar, of course).

One of their mothers had gone to a beauty salon, so the girls decided to set up their own beauty salon. (For sanitary reasons, the nursery school did not have combs, brushes, etc.)

This did not stop them for one minute. They went on a hunt for the equipment they needed. Bright, fat, early childhood crayons became “rollers”; a flat bed toy truck was a “dryer”, a ruler became a “comb” and so on until they were satisfied with their equipment.

Other children wanted to join the fun when they saw the big stash but they were told, “My mommy said I can’t play with any of you.” (This was a lie.)

The blond child became the client and was put in the chair. The other child stood behind and began combing and feeling straight, well brushed hair. The salon girl said, “Your hair feels real good. How come it’s so smooth?’

The client girl said, “Because my mommy brushes and brushes it every night.”

The salon girl said, “I wish I had hair like yours. I want to be the girl in the chair now.”

So the girls switched roles. The blond girl went to comb her client’s hair, but her hair was in many little pony tails with a barrette holding each in place.

Then she felt the client’s hair. “Your hair doesn’t feel like mine. But it’s real nice how your mommy lets you have so many barrettes. My mommy only lets me have one at a time.”

Then much to my surprise, the blond girl bent over (I thought to give her friend a kiss) to lick her cheek.

“What did you do that for?”

The reply was, “I wanted to see if you taste like chocolate.”

Both girls laughed and laughed. Then they began licking each other.

“We taste the same because we are the same.”